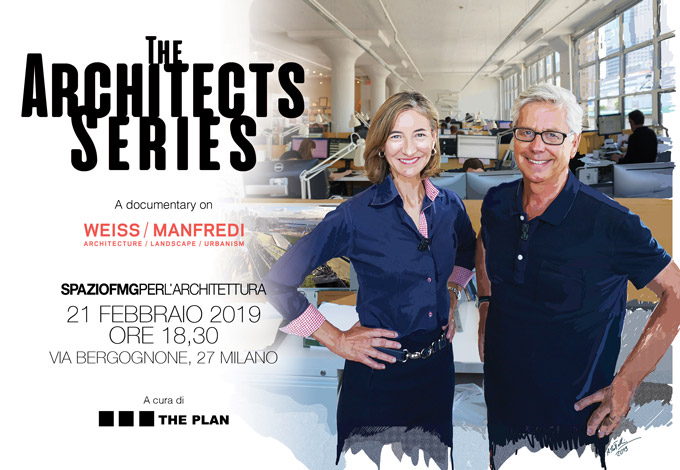 THE ARCHITECTS SERIES - A DOCUMENTARY ON: WEISS / MANFREDI

On 21 February 2019 SpazioFMG per l’Architettura hosts WEISS/MANFREDI, the New York studio founded by Marion Weiss and Michael Manfredi, a couple in life and work.

Participation in the entire duration of the conference earns architects 2 professional development credits.

Please confirm your attendance by registering at the following EventBrite link:
https://www.eventbrite.it/e/biglietti-the-architects-series-a-documentary-on-weissmanfredi-55631168322

The Architects Series continues telling the story of the world’s most influential architectural studios with the arrival of the new year. On 21 February 2019 SpazioFMG per l’Architettura hosts WEISS/MANFREDI, the New York studio founded by Marion Weiss and Michael Manfredi, a couple in life and work.
The two founders will be attending the inauguration, accompanying the screening of “The Architects Series - A documentary on: WEISS/MANFREDI” with a lecture on “Lines of Movement”, focusing on the convictions and principles inspiring the studio’s approach to design.

2019 begins with a new event in The Architects Series, the exhibition format curated by The Plan which has been bringing events to the Milanese gallery and showroom of the Iris Ceramica and FMG Fabbrica Marmi e Graniti brands since 2018.

The premiere on 21 February focuses on WEISS/MANFREDI Architecture/Landscape/Urbanism, the studio founded in New York in 1989 by Marion Weiss and Michael Manfredi, a couple in work and in life: a profitable partnership based on the desire to offer a vision combining different disciplines which converge to express the exact identity of a place, responding to both its strong and weak points.

In the studio’s particular vision, architecture should be involved in constructions of all kinds; the accentuated distinctions between the disciplines of architecture, art, ecology, landscaping, engineering and urban planning limit the state of architectural design, precluding new paradigms for contemporary living. The two founders began working together to question this limited vision, and their work has become an opportunity to consider, in both physical and disciplinary terms, a much vaster territory in which to express their creative potential.

Aware that a project never starts out with a tabula rasa, Marion and Michael approach every context as a new architectural chapter offering plenty of potential in which to create new opportunities, new visions and new scenarios. Every project, whatever its scale, is fertile ground for testing the capacity of a broader definition of design, imagining a critical practice that is an active tool for moulding contemporary culture.

The studio’s most important references, the utmost expression of their modus operandi and personal vision, include the Olympic Sculpture Park in Seattle, a project that puts back together and enhances what used to be an abandoned and contaminated part of the city; the Brooklyn Botanic Garden’s Visitor Center, in which architecture and landscape are merged with flowing curved lines; the University of Pennsylvania Center for Nanotecnology in Philadelphia, proposing interaction between the academic world and the city; the Tata Innovation Center, redefining Roosevelt Island as a symbol for Cornell Tech’s international standing; and the recently-completed Hunter’s Point South Waterfront Park, a new model for waterfront resilience and urban social life.

Their unusual projects have earned WEISS/MANFREDI a place of prominence among architectural practices that redefine the relationships among construction, landscape, infrastructure and art: the Architectural League of New York calls them one of the “emerging voices” on the international scene, and they have received numerous prizes and acknowledgements including the Tau Sigma Delta Gold Medal, the New York AIA Gold Medal, an Academy Award in Architecture from the American Academy of Arts and Letters, and the Cooper Hewitt Smithsonian Design Museum National Design Award for Architecture.

Michael Manfredi and Marion Weiss will accompany the screening of “The Architects Series - A documentary on: WEISS/MANFREDI” with a lecture on “Lines of Movement”.
The conversation will address and investigate the issues inspiring the immersive installation of the same name they created for the 16th International Architecture Exhibition in Venice. “Lines of Movement” will offer the starting point for introducing and examining the conditions of contemporary design in a century in which we have a limited quantity of resources to work with, and in which architecture must respond to the challenges of climate change and social isolation.