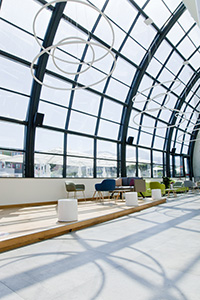 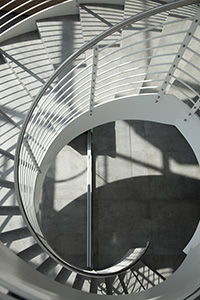 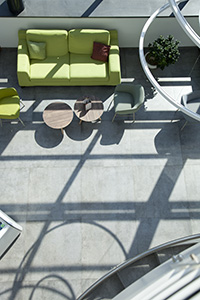 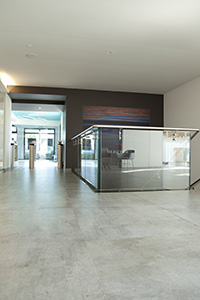 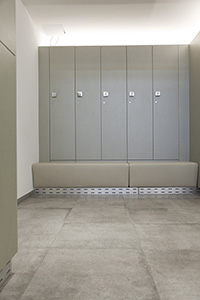 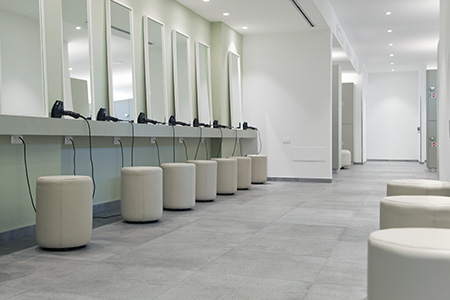 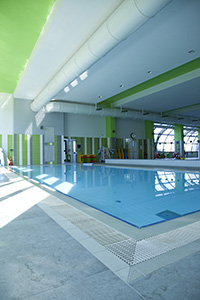 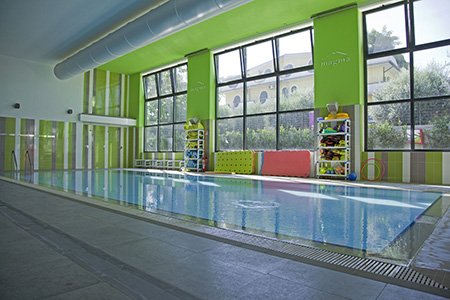 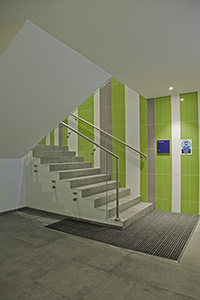 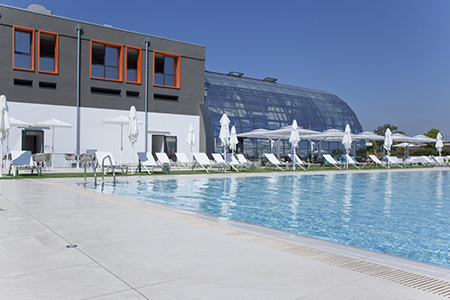 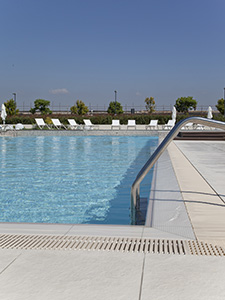 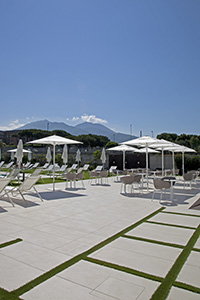 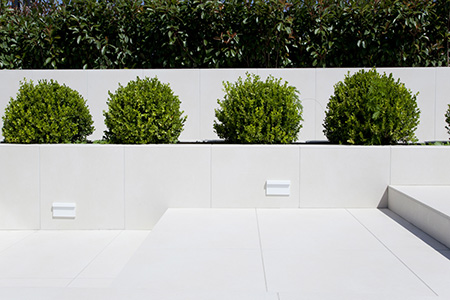 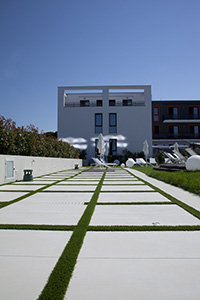 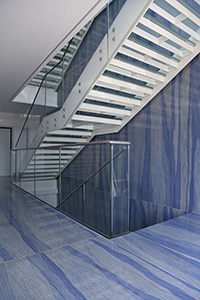 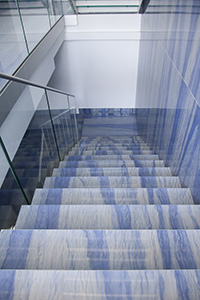 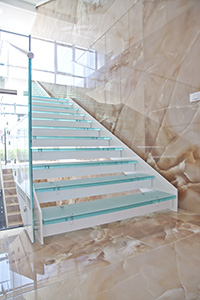 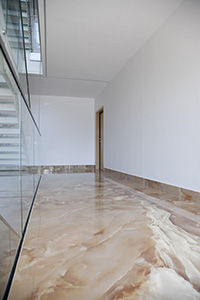 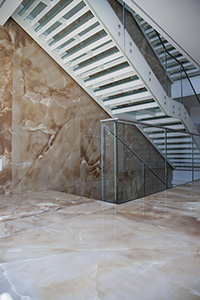 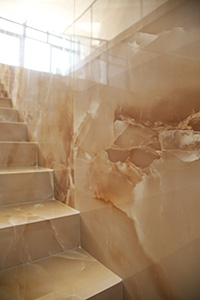 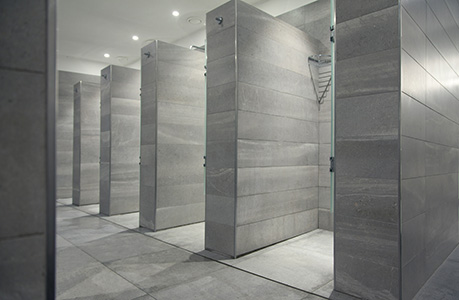 Ciro Violante, partner along with his brother Rosario of the construction firm Violante Costruzioni, introduces Magma Wellness and tells us how the idea of this large sports complex on the outskirts of Naples came about and why it chose to use Iris Ceramica Group’s versatile technical ceramic tiles both indoors and outdoors.

A breathtaking view of Mount Vesuvius, peeking out behind Mount Somma. From this side of the province of Naples, the fearsome volcano resembles the shape of an “M”, which is precisely the letter chosen for the logo of “Magma”, the sports and wellness complex built in Cercola, which was officially opened in February 2019. This choice is certainly no coincidence, since the very name of the complex brings to mind the volcano and fire, which are symbols of energy, passion and creativity. These elements provide a comprehensive overview of the project: in addition to being a beautiful sports facility, it is a project aimed at promoting and conveying positive values, such as those associated with sports and physical well-being. Magma Wellness is the result of a close cooperation between all the players involved, first of all the client who also built the facility, as well as the construction firm Violante Costruzioni and a team of architects from Studio Bizzarro, the architects Nardiello and Cicconi.

We met up with Mr. Ciro Violante, partner along with his brother Rosario of the construction firm Violante Costruzioni, to find out more about Magma Wellness and how the idea of this large sports complex on the outskirts of Naples came about.

Magma is red, pure fire, energy and passion for sports. It is located in a “red zone”, namely in a protected strip of land due to the risks associated with the nearby Mount Vesuvius. We are on the outskirts of Naples, specifically in the municipality of Cercola, in an area bordering other densely populated municipalities: San Sebastiano al Vesuvio, San Giorgio a Cremano and Ponticelli. Over the last few years, this suburb has undergone radical changes, also as part of major public works. For example, the hospital Ospedale del Mare was built right next to the property. As a matter of fact, the idea behind the sports complex stems from the desire to contribute to the rebirth of this area. Therefore, several considerations prompted us to come up with an innovative, one-of-a-kind facility, centered and based on striking a balance between health and exercise, a space where stress is not allowed. We also decided to build a large parking area for this facility.

In fact, you mentioned it was a 7,700-square-metre sports complex, consisting of a modern building on several floors and other facilities, such as the recently opened outdoor swimming pool.

Yes, this sports facility is actually located in an area of around 30,000 square meters, where we built an office building and where we will also be carrying out major redevelopment work on a former industrial warehouse. All the buildings in the area will have similar features: a simple, linear shape and a few eye-catching elements on the façades. The aim is for them to be recognizable as being part of a larger project while having different elements that set them apart. For example, Magma Wellness has a protruding portico and, upon entering, guests are instantly enveloped by natural light coming in from the curved, fully glazed wall surrounding the outdoor swimming pool, with Mount Vesuvius in the background. From this entrance hall, members have immediate access to the sports medicine and posturology clinic for medical examinations, the children’s playroom and the café. Also on the first floor there are two indoor swimming pools: a 25- meter, six-lane pool for competitive swimming and a 12.5-meter, six-lane pool for educational activities and aqua fitness, as well as two children’s changing rooms for pool users. The adult changing rooms – which, of course, are separate for men and women – are on the lower floor, where there is also a VIP changing room for the spa that we are going to build. These two floors are dedicated to “Water” activities, while the large, dramatic staircase in the entrance hall leads up to the two upper floors dedicated to “Earth” activities. The fitness and spinning rooms are on the second floor, as are the two adult changing rooms and the beauty salon offering treatments and massages. On the third floor, instead, is the personal trainer room, a large room with high-tech gymequipment and two music fitness rooms with a stereo system and completely soundproof walls.

Fabiana Marinò’s photographic reportage highlights the qualities of these technical ceramic surfaces. You chose Iris Ceramica Group’s materials, especially those by the FMG Fabbrica Marmi e Graniti and Iris Ceramica brands, with different finishes, also for specific and prestigious applications such as the circular staircase. These examples clearly highlight your firm’s implementation skills, but can you tell me what influenced you in choosing these products?

We have been working together with Iris Ceramica Group for a few decades now. In fact, our construction firm was established by my father in the late 1960s and we, Ciro and Rosario, have continued in his footsteps and expanded the firm. I also feel like stressing the fact that we are, perhaps, somewhat “unusual”, since our construction firm has suitable workers and equipment to do work that is normally outsourced, such as windows and doors, as well as precise laying of wall and floor tiles, including special applications. We chose Iris Ceramica Group’s materials not only for the sports complex but also for the nearby office building. For example, we tiled the stairs and hallways with FMG’s large Maxfine Onice Ambra marble-effect tiles, with a polished finish, and with the large, brightly colored Azul Macaubas tiles, also with a polished finish, size 300X100 cm. For the outdoor floor and offices, instead, we chose Iris Ceramica’s Calx Grigio cement-effect tiles, with a homely and warm feel and, last but not least, for the restrooms, we chose Iris Ceramica’s Sync Steel Grey stone-effect tiles, with warm and embracing shades. The fact that we were both clients and builders at the same time definitely gave us an advantage, since it allowed us to make choices quickly together with the architect. For instance, we preferred to arrange a meeting at the exhibition hall of Iris Ceramica and FMG in Fiorano Modenese (in the province of Modena) to actually see the materials and decide on the more suitable ones to use. Therefore, for the flooring of the sports complex, we chose the City Stone Dove tiles from the Maxfine collection by FMG, as we had set ourselves the goal of achieving an authentic stone effect, without sacrificing the high performance and flexibility of technical ceramics. The reduced thickness of this material allowed us to create special applications, such as the steps of the dramatic circular staircase. As for the outdoor pool, we wanted to create a very luminous effect and to enhance the contrast between the green lawn and the blue water, which is why we chose the pure white Roads White Purity tiles by FMG, size 60x120, combining two different finishes (a natural one for the outdoor area and a framed one for the edge of the pool), where a structured, non-slip surface was required.

This outdoor swimming pool was the latest addition to the Magma complex. Are you working on any other new projects?

Well, work slowed down due to the lockdown, but we are already working on building a spa with a sauna, Turkish bath, etc. in the basement of the building to complete this project so that its purpose can be fulfilled, that is, to strike a balance between health and exercise.